I stumbled upon a paper in a recent issue of PNAS where the authors provided evidence for three startling claims. The title of the paper “Inequality in nature and society” caught my attention and the arguments presented were both challenging and novel.

In summary, they suggest that the patterns of inequality in nature (i.e. the dominance of abundances of a single species in an ecosystem) and inequality in society (select billionaires aggregating the majority of global wealth) are similar1. For example comparisons using the Gini Index of the wealth in countries and in natural communities are nearly identical.

The paper goes on to suggest that the mechanisms present in nature and society to counteract this hyper-dominance are fundamentally the same (i.e. predation/“natural enemies” and wealth-redistribution respectively).

What was then argued and supported by modelling and simulation ran straight against conventional thought. The authors suggested and went on to show that:

inequality in both systems can arise from chance alone.

So-called “null-models” in ecology are well known, but this claim challenges the commonly accepted notion that “entrepreneurial advantage”, competitiveness and work-ethic explain the wealth gap.

I checked the supplementary materials to see how these models were built and rejoiced to see that basic equations and scenarios could be used to investigate this behaviour.

In this post I will demonstrate the first of the three agent-based models;

In this simulation the following scenario in constructed;

\[W_i(t+1) = (1+D_i) \times W_i(t)\] - the overall amount of money is maintained constant by redistributing overall gain or loss over all agents proportionally to their wealth:

To get a basic working implementation 2 one needs:

In this case I iterate N steps/cycles with a simple for loop structure.

The game-function uses sample to draw numbers from the dice and assign new wealth to each player. The per-round wealth is adjusted based on the difference between the total initial and new wealth.

A empty matrix is prepared to hold the results, and then one steps through the desired simulation. The apply function is used to compute for every row (MARGIN = 2) in our dataset of wealth. The initial data is progressively updated for each step.

Using the matplot function one can plot the entire array together to trace wealth development, or alternatively transform the data into a dataframe for plotting with ggplot2 (shown below). 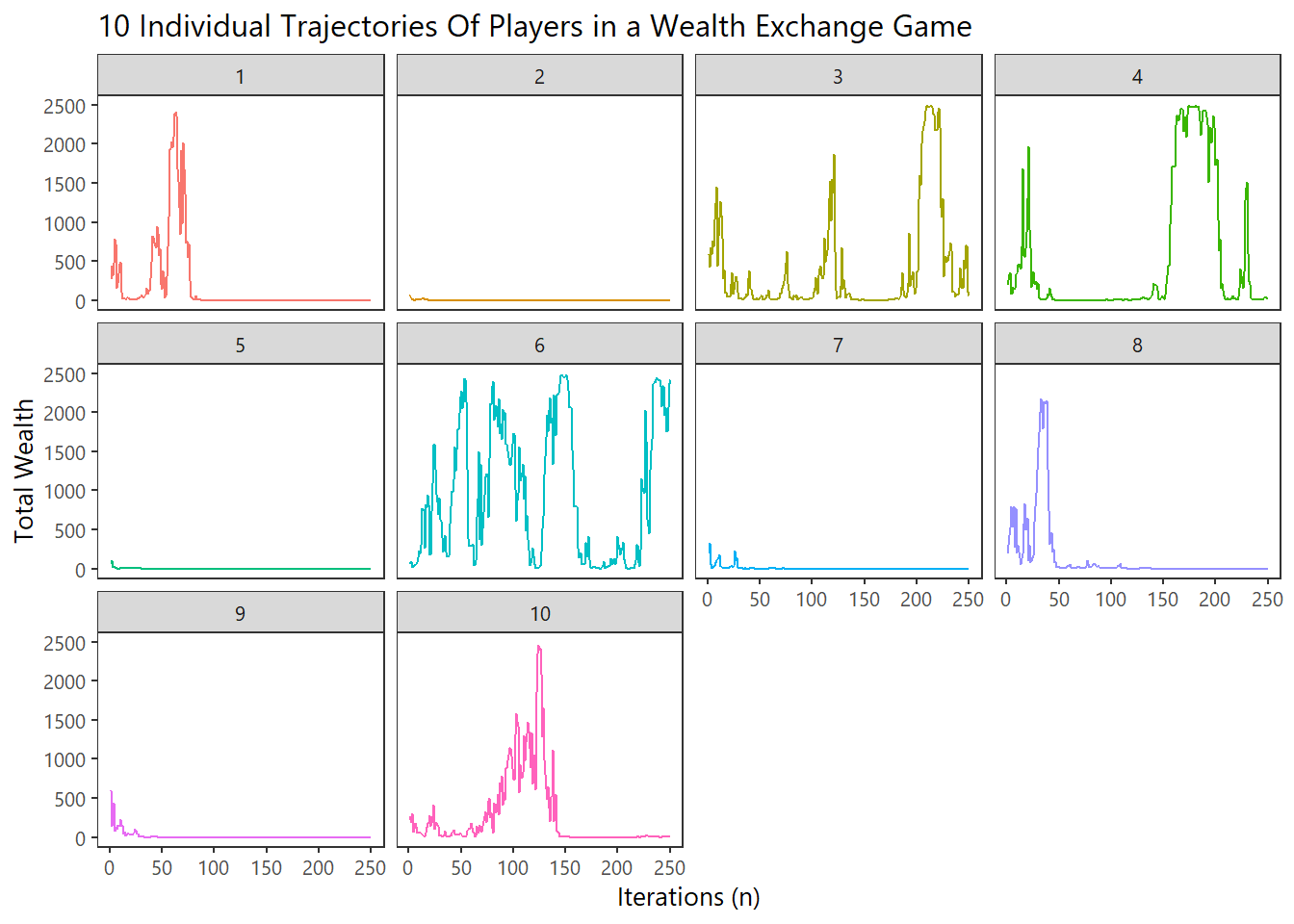